First, look at this marvelous cover for Simply Irresistible.  It’s irresistible, right?  I love it.  Soooo much better than the original cover from a few years ago.  I can’t wait to share the full wrap cover with you when the trade paper version comes out in a few months. 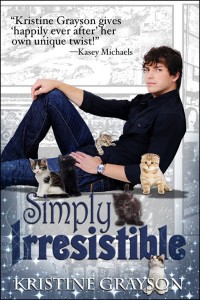 But, as you can tell, Simply Irresistible is now available as an e-book.  You can get it on your Kindle, Nook, or from Smashwords.  Other e-bookstores should have it as well.  And here’s the blurb and a link to the free excerpt on Smashwords, so that you’ll know if the book is for you:

Dexter Grant, the inspiration for the greatest superhero of all time, lives in reduced circumstances. Now he runs a pet store in Portland, Oregon, and privately calls himself a Kitten Superhero because he saves stray animals. He aspires to something greater, but his magic has been restricted—by the Fates.

The Fates, three women who control the magical universe. Only they’ve lost their position, and they’re on the run. They’ve turned to an old friend for help, but that friend is dead. Her niece, Vivian Kineally, runs her estate. Vivian, who doesn’t even know magic exists. Vivian, who loves comic books. Vivian, who also happens to be psychic.

“Simply Irresistible is an enchanting blend of sweet romance, mythology, and magic as Grayson puts her own unique magical stamp on figures from Greek myths and fairy tales, including a deliciously over-the-top super villain and a hero who inspired the creation of Superman. And Grayson’s clever, humor-tinged writing is absolutely delightful.”
—Booklist