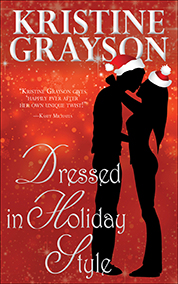 I’ve had so much to do this year that I had to scramble to write a new Kristine Grayson holiday romance before the holidays began. I had written two before, and I really wanted to get the third to you before the season began. Dressed in Holiday Style is loosely related to the other two, but go ahead, read it first. Then read the other two.

Set in Chicago, Dressed in Holiday Style follows journalist Raine Wilkins on the night she meets the mysterious Niko North. Wish fulfillment, leaky boots, and a horrible press conference lead to magic and romance during the holiday season.

Dressed in Holiday Style appeared this week, and should be on all online sites as an ebook (if not, wait a day and it’ll be there). I know it’s on Amazon, Barnes & Noble, and Kobo.  It’s also available in trade paper. If you end up liking this one, pick up Up on The Rooftop, and Visions of Sugar Plums, which also follow the adventures of S-Elves from Claus & Company.